Cupcakes can be encountered as enemies or can be playable/recruitable units. [1] They are living cupcakes with various flavors.

A Cupcake healing an ally.

Cupcakes can mount Spidaurs to keep their precious health safe. Be on the lookout for Area of Effect damage, as it will hurt both the Spidaur and its rider.

Having a Cupcake trades having available fighting units for a healer, reducing the amount of units able to block enemies. With Cupcakes often being priority for the enemy, it is even more important to have a good position to fend off attackers so they don't reach the healer. Cupcakes generate a lot of health, each regenerated point means as much as 10 for the team, making them extra important to keep safe, which pays off in long battles.

Cupcakes have very poor defense and their health is worth more than it appears. Indeed, every point of damage dealt to them stops them from turning that health into around 6 for a friendly unit, boosting the effective damage done significantly! Targeting enemy Cupcakes should be priority.

Mortar units can try to land shots without having to go through the melee units that generally defend a Cupcake.

Cosmetic items you can give the Cupcake to change their look. Cupcakes are a creature with purely Cosmetic Items, with none of them affecting stats or resistances. Cupcakes has 2 cosmetic categories, Frosting and Topping. 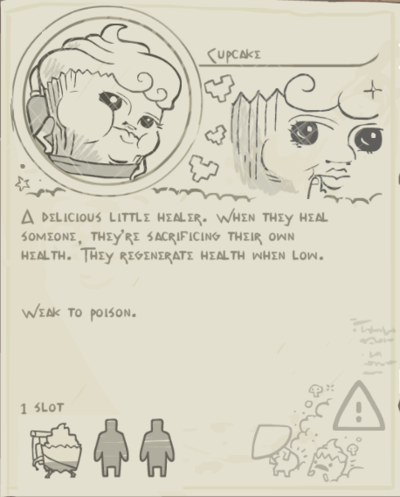