Mushrooms are large, living fungi that use toxic flatulence to poison the enemy team.[1] They are great for controlling the flow of the battle, pressuring the enemy's formation with their Area of Effect poison.

A Mushroom farting on some enemies.

When playing around Mushrooms, make sure to keep away from their poison farts - it will hit friends and foes alike. Due to this, they shouldn't be used as part of a unit wall, except if their adjacent units are resistant to poison.

The mushroom is best used when fighting in a separate area of the battlefield, disrupting the backline by itself, allowing its allies an easier fight. Gas clouds linger for the duration of the enemy's movement phase. Landing the gas clouds in between enemies and allies might force the enemies to either walk through them, or avoid them, affecting their strategy.

Contrary to most units, mushrooms are in a good position when surrounded by enemies (as long as they aren't resistant to poison). Try to keep them around where the fight is taking place, so they can almost always poison 2 units or more.

Mushrooms are good to focus attack Electrobots or other Mushrooms, against whom their melee attack is quite strong.

due to the mushrooms A.O.E. attack it is best to avoid using a lot of units to take him down. using elecrtobot is effective since they can not be poisoned. mallets also work well because of the cap on their head. ranged can be OK, but they can block some ranged attacks with the cap.

Notice: To add cosmetics, please edit the Template below at Template:MushroomCosmetics, add a file with a square resolution with the name "itemnameCosmetics.png", and add the cosmetic to the table as an MP nolink template. 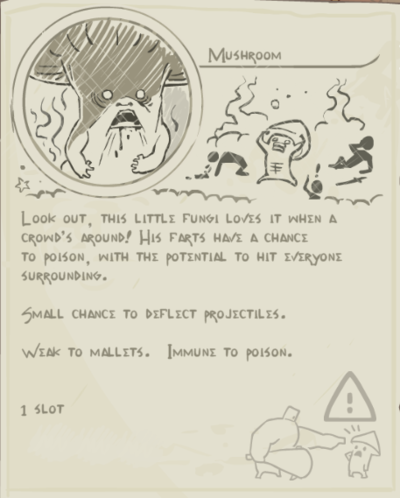