Pixies can be encountered as enemies in the Pit People. They are able to create explosions and rain fire on their attackers, but can only attack by leaving one hex between them and their target. Pixies can also be part of the player's team and are resistant to fire attacks. Their look also can be customized with Pixie specific items and human head gear. [1] While Pixies easily can dodge a lot of enemy attacks and aren't so quickly hit, they still should be cautious around Robots and their electricity attacks.

Notice: To add cosmetics, please edit the Template below at Template:PixieCosmetics, add a file with a square resolution with the name "itemnameCosmetics.png", and add the cosmetic to the table as an MP nolink template. 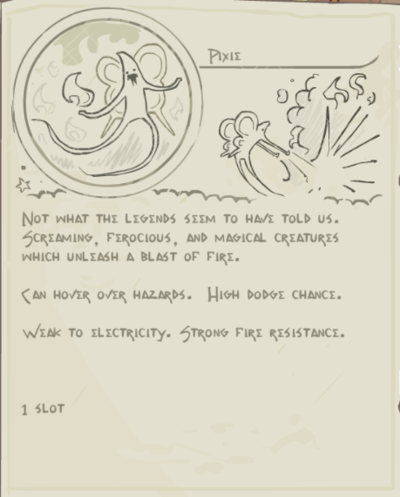 Since a Pixies attack deals damage to three random hexes around the actual explosion, is possible for the pixie to damage itself upon missing.