Wraiths are deadly spirits and they also can be members of a team! They come with the ability to cross over hazards in the terrain. In a fight, they can send out a projectile and weaken opponents in their attacks. In close range, the wraith is able to perform a single swipe. The wraith is resistant to poison and electricity, but rainbow horse's ranged attack will hurt Wraiths more than other fighters!

Playing with:
Wraiths make a good semi-offensive support unit. They have good movement, fly and have the best range of the three close-combat flying magical units (Electrobots/Pixies). Their damage and health aren't that good, but the debuff makes up for it. The Skull Spit Area of Effect is random, try not to hit your own units with it! Since they prefer attack enemies farther away, they are useful for sniping enemies hiding behind other units.

Wraiths are good against Electrobots, taking almost no electric damage. Debuffing Vampiresses mean they will damage less and leech less health. Also, Vampiresses can't leech health off of Wraiths, even though Cupcakes can heal them.

Playing against:
Rainbow Horse shots do bonus damage, but aren't accurate. Mobbing a Wraith is your best bet, as it suffers in close quarters.

Cosmetic items you can give the Wraith to change their look. Wraiths are a creature with purely Cosmetic Items, with none of them affecting stats or resistances. Wraiths has 2 cosmetic categories, Mask and Belts. 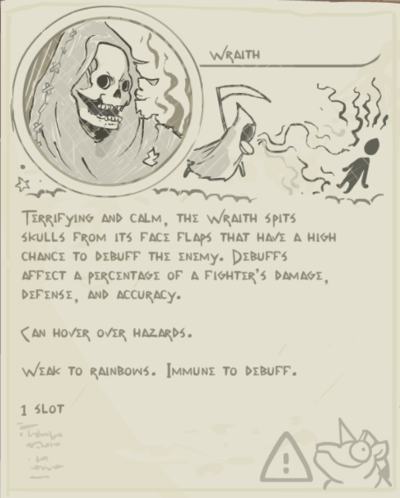